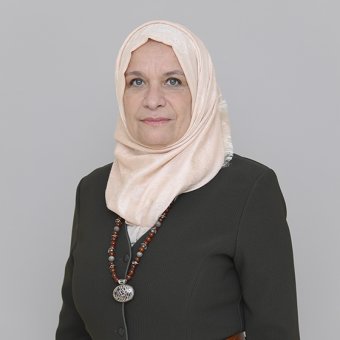 Dr MATAR Soad PH. D from Franche-Comte University - FRANCE. Awarded with Honors ’and Highest Distinction as well as the congratulation from the jury. Extensive Teaching Experience for more than 29 years. Currently works at the College of Communication at Al Ain University. Dr MATAR does research in the field of Communication and Media. Her most recent publication being "Media Coverage and Environmental Issues, and Sustainab in UAE"accepted to be published in the Regular Issue of May 2020.  Scopus Journal indexed.

Passionate and having a strong and successful teaching experience. Having a strong theoretical understanding with critical thinking and excellent practical skills.

Taught in Erasmus International Program. Able to teach in interdisciplinary and in different languages. Teaching experience with U / G and P / G students. Worked as Head of Public Relation and Media.

In 2012 with Lebanese writer Emily Nasrallah

Taught for ARA to the College of Communication and Media for undergraduate level for both male and female Students.

Academic Education and Research   at  France

Taught for The Faculty of Political Sciences

For undergraduate and graduate (Media and Communication Courses as a part of the study program.) – at Jakarta

Practical experience in the field:

-Media reporter and presenter at Radio Middle East in Paris

• Mass Media In the UAE,