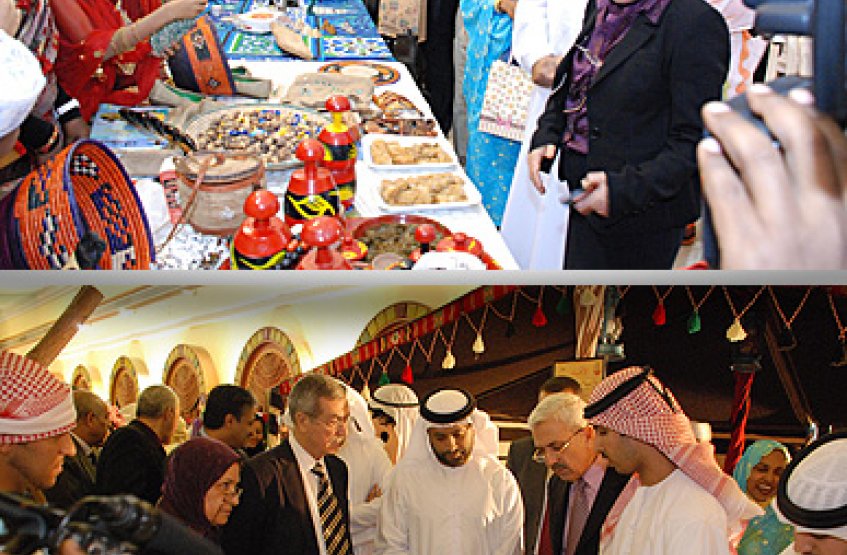 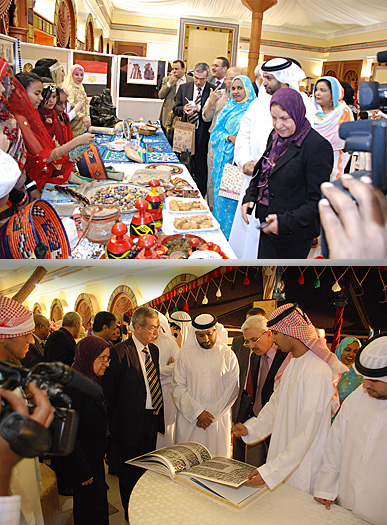 Al Ain University, Abu Dhabi Campus, organized an International Day in Al Mushrif men hall on Monday 2/5/2011. This is a joyous celebration of heritage and culture by members of all communities represented in the U.A.E

After the opening of the event at 7:30 PM at the reception area, AU President, Vice President for Financial Affairs, VIP's and other guests toured the cultural stands in order to fully experience the heritage of these countries and their traditions. Those countries included: UAE, Bahrain, Oman, KSA, Qatar, Palestine, Jordan, Egypt and Sudan.

Later, AU President gave a speech followed by a speech from the Deanship of Student Affairs. This was followed by exciting cultural entertainment: exhibits, dances, songs, sculpture, posters, and traditional weddings (from both Sudan and Bahrain), and competitions where simple gifts were given away.  One of the main highlights of the night was a traditional U.A.E. performance of “Al-Shohooh” which left the audience speechless. Other highlights include the Egyptian traditional Tannoura dance, and the Palestinian Dabkah dance which fascinated the crowd. This was topped by a rare collection from Emirati heritage featuring: the first edition of Al Ittihad Newspaper, old U.A.E. coins, and the rare book of Sheikh Zayed’s Grand Mosque.

Also, other attractions such as “Majed”, and the most famous Emirati cartoon character, ”Um Khammas”, added richness to the event. In addition, a variety of cultural dishes from different countries were present at stands and in the reception area.

Towards the end of the event, the guests enjoyed dinner accompanied by an interesting UAE traditional dance called “Ayalla”, preformed and perfected by Al-Ain University students.  Following that, AU President, Dr. Moien Kanaan; Mr. Omar Jaber, Vice President for Financial Affairs; and Dr. Zuhrieh Shana, Deputy Dean of Student Affairs handed out certificates of appreciation to all participants, who added value to this event.