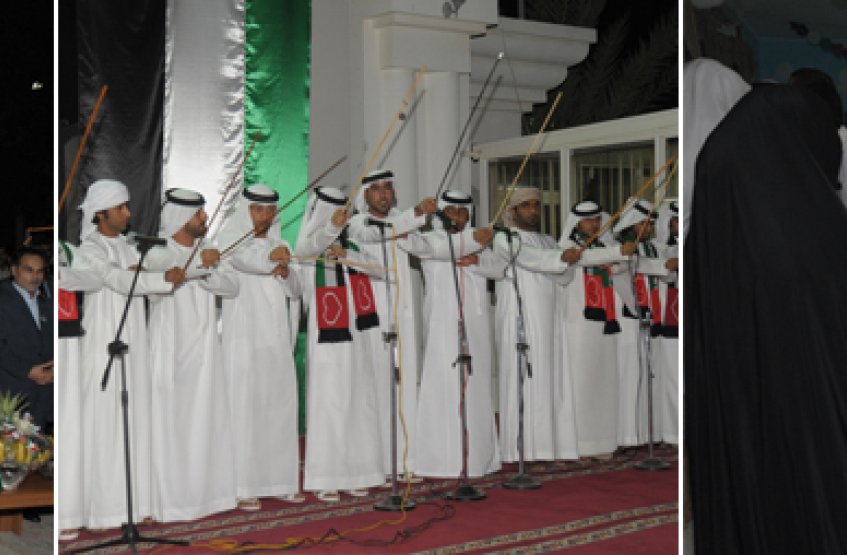 The 40th UAE National Day was observed by both of AAU’s campuses last week with three-day celebrations of the ‘Spirit of the Union’. This included activities such as poetry recitals and traditional dances in commemoration of the occasion.

The AAU President, Professor Ghaleb El Refae, accompanied by Dr. Abdelhadid Belarbi, AAU Vice President, attended the kick off ceremonial event, as well as a large number of special guests and students. The event began with the UAE National anthem and a recital from the Holy Quran followed by an opening speech from the AAU President.

Prof. El Refae’s speech reiterated that the 2nd of December will always be remembered as an historic day both regionally and internationally as it marks the launching of a unique federal model whose foundations were laid by the late HH Sheikh Zayed bin Sultan Al Nahyan.

He said, “Through the Union, the UAE has set a glowing example for the rest of the world by building a country based on a spirit of modernity and science, yet that is well-rooted in its national, Arab, and Islamic values.”

Prof. El Refae went on to pay tribute to the auspices of HH Sheikh Khalifa bin Zayed Al Nahyan, President of the UAE, for the progress and prosperity the country has witnessed in all fields. He added that Al Ain University is a pillar in the UAE’s educational and cultural process and that they shoulder a huge national responsibility for preparing generations. He also praised the support that the UAE Vice President and Prime Minister and Ruler of Dubai, HH Sheikh Mohammed bin Rashid Al Maktoum, and their Highnesses the Rulers of the Emirates and Members of the Federal Supreme Council, have extended to both the national development and to the education sector whilst serving the best interests of the country and the people.

The AAU President commended the resolute attention HH General Sheikh Mohammed bin Zayed Al Nahyan, Crown Prince of Abu Dhabi, Deputy Supreme Commander of the Armed Forces, has paid to the universities and their developmental strategies, executed under the patronage of HE Sheikh Nahyan bin Mubarak Al Nahyan, the Minister of Higher Education and Scientific Research.

Dr. Abdelhafid Belarbi, AAU Vice President, applauded the AAU students’ contribution in transforming the campus into an arena of festivities in celebration of this esteemed, national occasion. Spectacularly decorated with flags, banners and lights, every corner of the campus reflected the celebratory mood of the nation. Moreover, the students’ heartfelt participation in the activities and performances played an important role in making this important day a great success.