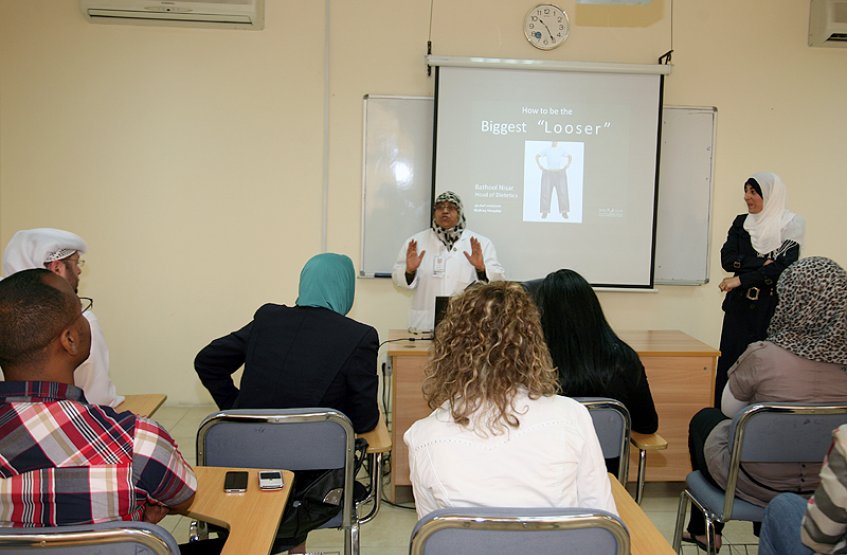 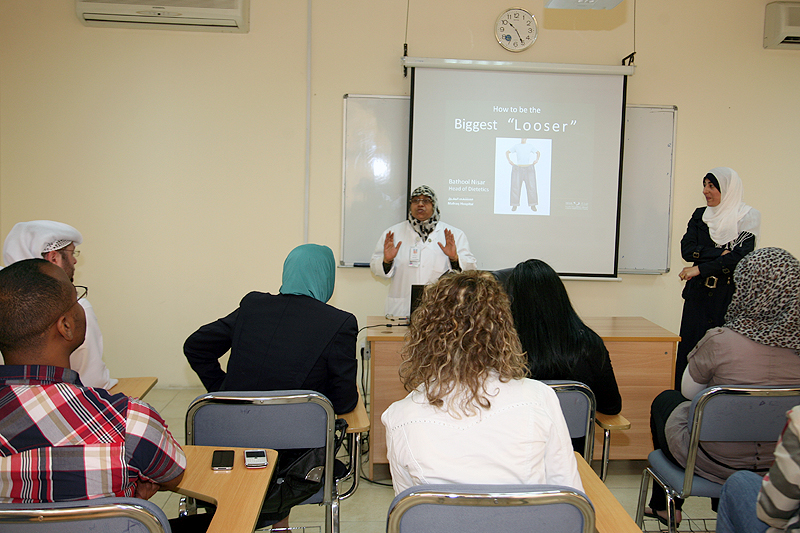 In cooperation with the Department of Nutrition at Al Mafraq Hospital, Al Ain University organized a competition entitled "The Biggest Loser" through which it aimed to support students and staff in losing weight in a healthy way in one month. The competition also came to combat obesity, identify the risks attached to it, and highlight the importance of keeping fit and acquiring sound eating habits.  The competition came as part of AAU’s efforts to raise the level of health awareness among students, and in exercise of its role toward the members of the community. The activities accompanying the launch of the competition included an awareness lecture on weight and health to help participants in the competition choose a healthy, balanced diet to lose weight without affecting their health. In addition, Dr. Batool, Head of the Department of Nutrition at Mafraq Hospital, introduced the concept of obesity and the reasons for its deployment in the United Arab Emirates; she also touched upon some unhealthy diets and the causes that lead to not losing any weight despite following those diets.

Dr. Zuhriah Shana, Deputy Dean of Student Affairs, mentioned that the community is witnessing an increased rate of obesity and accompanying diseases such as diabetes, high blood pressure, cardiovascular diseases, and others. It goes without saying that raising health awareness plays an important role in reducing these rates and in the fight against obesity and its consequences. Consequently, AAU has launched the “Biggest Loser” competition to urge students and staff to follow a healthy diet contributing to weight loss during a maximum period of one month; the winner is he who shows full commitment to the diet, hence losing more weight than everybody else.

The fight against obesity needs to be through following sound, healthy diets which was one of our aims during the seminars delivered by the physicians from Mafraq Hospital. It is also important for the diet to be compatible with the individual’s bodily needs and health. The competition combats not only obesity, but also unhealthy eating habits and harmful diets. Therefore, prior to launching the competition, a series of awareness workshops held by professionals and physicians were organized focusing on the importance of staying fit and the role exercise plays in avoiding the numerous diseases resulting from obesity, Dr. Shana added.