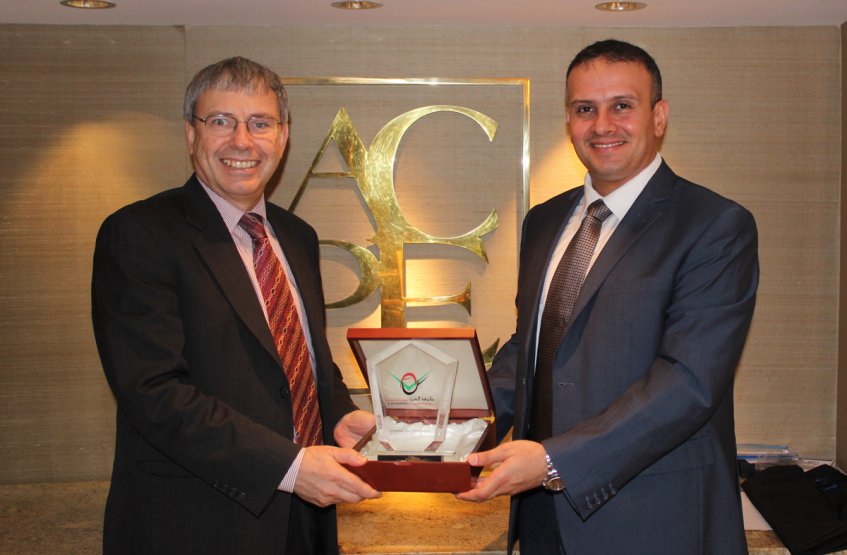 Mr. Michael Rose, Head of International Affairs at the American Council for Pharmacy Education (ACPE), greeted Dr Noor Aldeen Atatreh, the AAU Chancellor, and the accompanying delegation during their visit to the United States, which included a visit to the American Council on Pharmaceutical Education in Chicago. They also participated in the conference on Molecular Biology and Therapeutics for cancer, organized by the American Association for Cancer Research, held in Boston, USA.

The two parties have discussed on how to establish and rteinforce the relationship between the College of Pharmacy at the University and the American Council for Pharmacy Education as they have met in Illinois, Chicago during the former’s visit. They have also talked about developing the college in all aspects since the college is the only sole college in UAE that has obtained the international accreditation (ACPE).

Dr Noor has well-clarified that several topics have been proposed in the meeting, and among these subjects is about preparing a workshop hosted by the AAU College of Pharmacy in Abu Dhabi during the month of March 2016. This workshop will be distinguished as it is the only event in the entire state of UAE in cooperation with ACPE.

He has also mentioned that the event will provide many important topics in the field of pharmacy education and the ways of its development as well as its outputs, which will entice event scientists and researchers from major American universities.

Mr Rose has shown unlimited support to this event to make all experiences accredited to the Council for raising the level of the workshop so that this event is the first of its kind in the region. At the end of the visit, Dr Atatreh handed Mr Rose the University’s shield to show his appreciation for the good reception and hospitality.

On the other side,  the AAU delegation participated in the Molecular Biology and Therapeutics Conference for cancer as organized by the American Association for Cancer Research, which was held in Boston. The University participated in the field of cancer research as this conference is one of the most important conferences worldwide to treat cancer, with the involvement of more than 3000 scientists from major universities and pharmaceutical companies, who were discussing the latest science in the fight against this insidious disease.