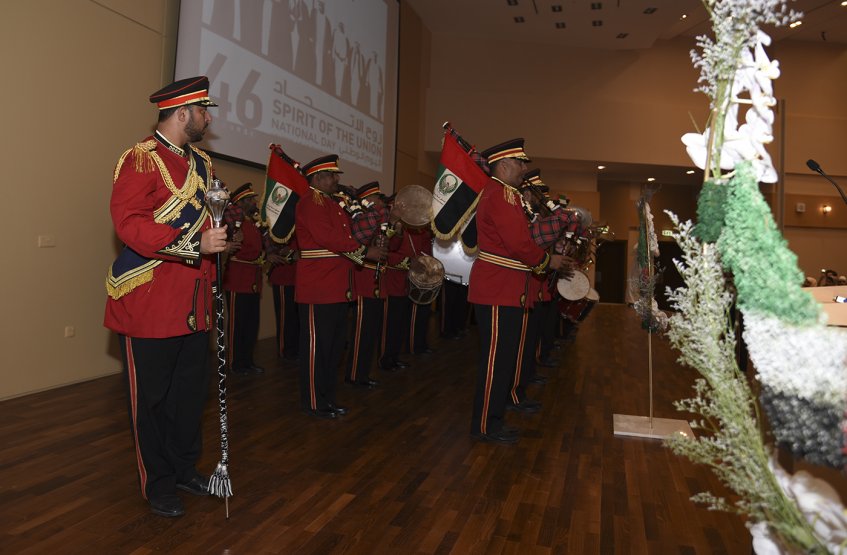 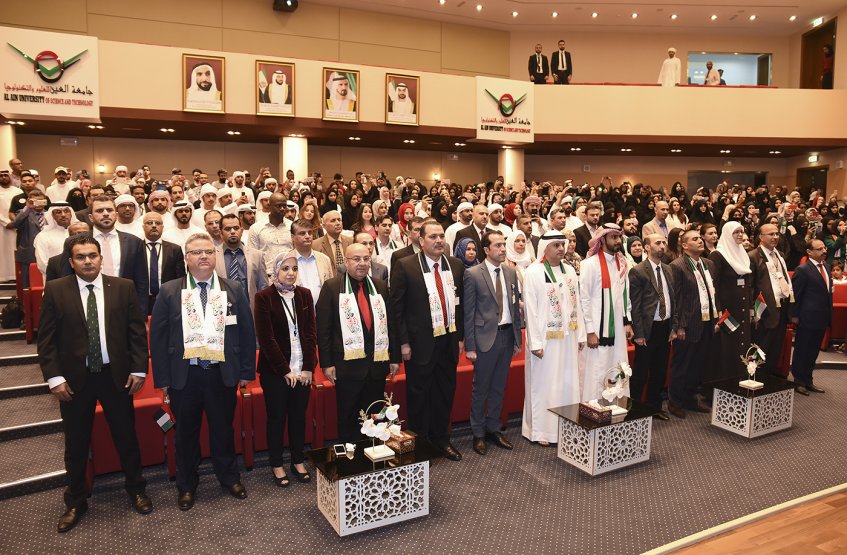 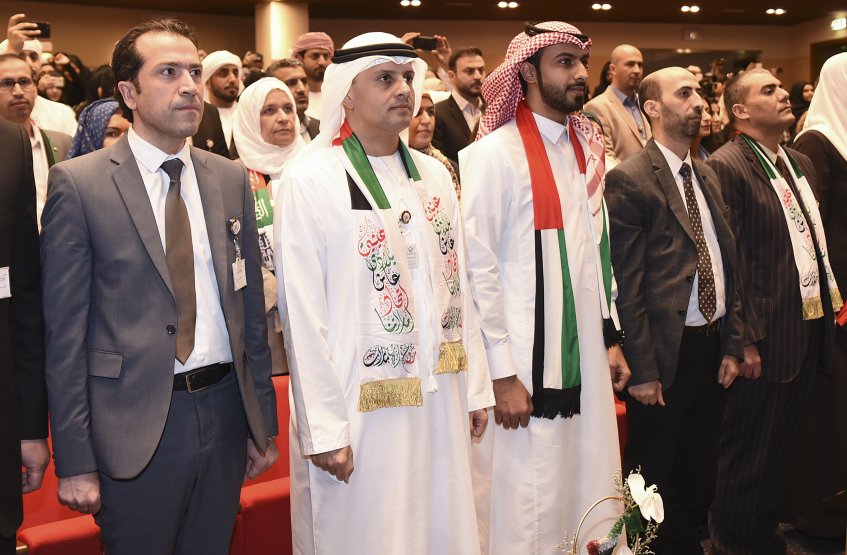 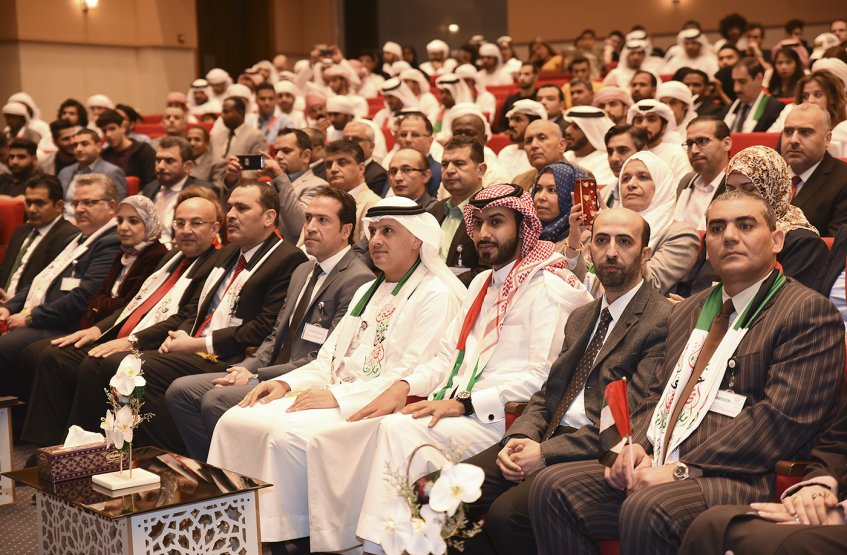 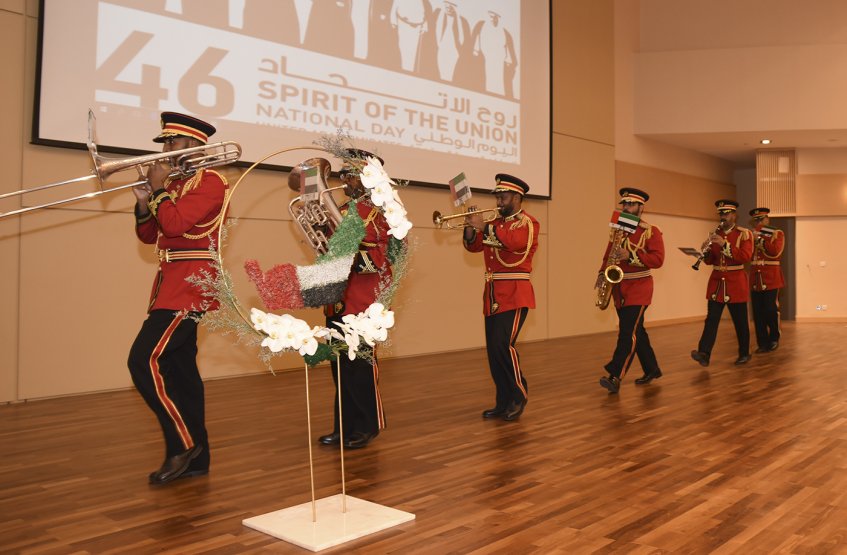 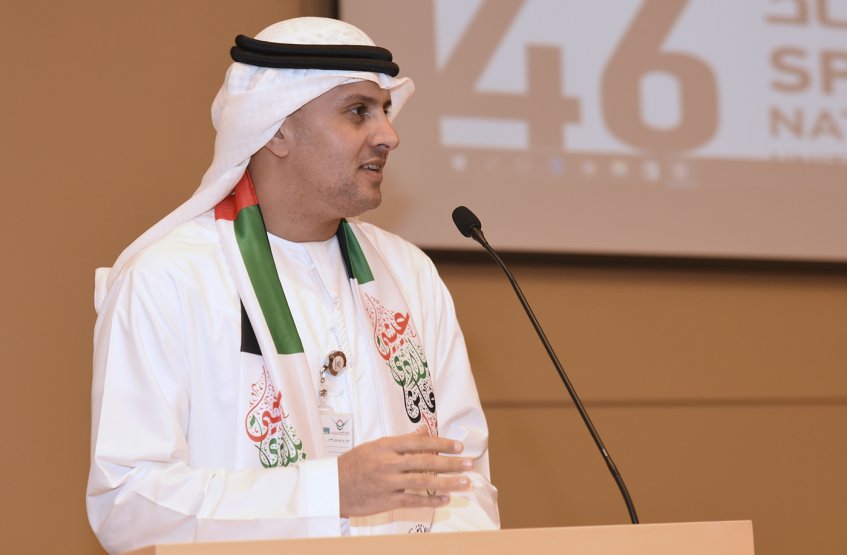 The celebrations were characterized this year by organizing a walkathon at Abu Dhabi campus with the tune of national military music, which witnessed a great participation of the AAU family and visitors, in addition to, an exhibition for graduation projects for the students of the College of Mass Communication and Media and the College of Education, Humanities and Social Sciences.

The Celebration in both campuses included different activities organized by the Deanship of Student Affairs, such as;  a heritage exhibition showcasing the UAE heritage and culture and traditional arts that reflects the UAE’s heritage authenticity, heritage tent, traditional foods corner and hawks show, military band show, Youla shows, traditional dances, theatrical performances and poetry shows which express the joy of citizens of this historic day, their loyalty and gratitude to the leadership.

On this occasion, HE Bin Rakkad said; “The path of our beloved country and its successes and progress is the result of the vision of the wise leadership, he added, On this historic day, we extend our congratulations to the H.H Sheikh Khalifa Bin Zayed Al Nahyan President of the United Arab Emirates and H.H. Sheikh Mohammed Bin Zayed Al Nahyan Crown Prince of Abu Dhabi and Deputy Supreme Commander of the UAE Armed Forces.

HE Bin Ham congratulated the United Arab Emirates on the occasion of the 46th National Day and expressed his happiness at the celebration of the Al Ain University. He also appreciated the efforts of the University's administration and all its organizers in organizing this special ceremony.

On his speech, Dr. Atatreh congratulated H.H Sheikh Khalifa Bin Zayed Al Nahyan President of the United Arab Emirates, H.H. Sheikh Mohammed bin Rashid Al Maktoum Vice-President and Prime Minister and Ruler of Dubai, H.H. Sheikh Mohammed Bin Zayed Al Nahyan Crown Prince of Abu Dhabi and Deputy Supreme Commander of the UAE Armed Forces, the UAE nation and the AAU’s family on the occasion of the 46th UAE National Day. He also said, “We are celebrating the UAE 46th National Day and we are about to bid farewell to the year of giving and receive the Year of Zayed, this year will be special, recalling the memory of the late father, leader and founder Sheikh Zayed bin Sultan Al Nahyan, May God have mercy on him,  asking God to preserve this country and maintain security and prosperity under our wise leadership. "

For his part, Prof. El Refae, stressed the uniqueness of the UAE in its economic diversity and its development, which makes it a forum for all international economic, investment, cultural, scientific and technological institutions, and that is because of the wisdom policy of the UAE leadership. He added, “The celebration of the 46th National Day is a real symbol of the people’s love to the leadership”.

It is worth to mention that, the celebrations had a huge number of visitors and attendees who expressed their love, loyalty and belonging to the UAE.