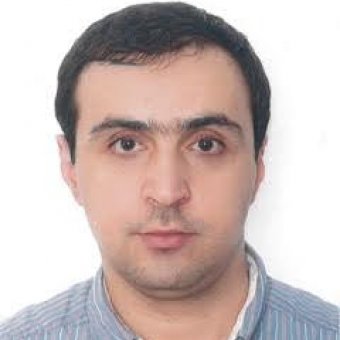 Mu’ath Al-Hasan   received his  B.Sc. degree in electrical engineering from the Jordan University of Science and Technology,  Jordan, in 2005, the M.Sc. in wireless communications from Yarmouk University, Jordan in 2008, and the Ph.D. degree in Telecommunication engineering from Institut National de la Recherche Scientifique (INRS), Université du Québec, Canada, 2015. In 2013, he worked at Planet Labs. Inc, California, USA as an RF Engineer.  In May 2015, he joined Concordia University as postdoctoral fellow.  He is currently an Assistant Professor at Al Ain University, Abu Dhabi, UAE. Dr.  Al-Hasan is the recepeint of the prestigous ADEK Award for Research Excellence in 2019.  His current research interests include Millimeter-wave Antennas, Terahertz bands, Channel Modling, MIMO systems, Artificial Materials.

Contemporary microwave design heavily relies on full-wave electromagnetic (EM) simulation tools. This is especially the case for miniaturized devices where EM cross-coupling effects cannot be adequately accounted for using equivalent network models. Unfortunately, EM analysis incurs considerable computational expenses, which becomes a bottleneck whenever multiple evaluations are required. Common simulation-based design tasks include parametric optimization and uncertainty quantification. These can be accelerated using fast replacement models, among which the data-driven surrogates are the most popular. Notwithstanding, a construction of approximation models for microwave components is hindered by the dimensionality issues as well as high nonlinearity of system characteristics. A partial alleviation of the mentioned difficulties can be achieved with the recently reported performance-driven modeling methods, including the nested kriging framework. Therein, the computational benefits are obtained by appropriate confinement of the surrogate model domain, spanned by a set of pre-optimized reference designs, and by focusing on the parameter space region that contains high quality designs with respect to the considered performance figures. This paper presents a methodology that incorporates the concept of nested kriging and enhances it by explicit dimensionality reduction based on spectral decomposition of the reference design set. Extensive verification studies conducted for a compact rat-race coupler and a three-section impedance matching transformer demonstrate superiority of the presented approach over both the conventional techniques and the nested kriging in terms of modeling accuracy. Design utility of our surrogates is corroborated through application cases studies.

An Intrabody Nanonetwork (IBNN) is constituted by nanoscale devices that are implanted inside the human body for monitoring of physiological parameters for disease diagnosis and treatment purposes. The extraordinary accuracy and precision of these nanoscale devices in cellular level disease diagnosis and drug delivery are envisioned to advance the traditional healthcare system. However, the feature constraints of these nanoscale devices, such as inadequate energy resources, topology-unawareness, and limited computational power, challenges the development of energy-efficient routing protocol for IBNNs. The presented work concentrates on the primary limitations and responsibilities of IBNNs and designs a routing protocol that incorporates characteristics of Exponential Weighted Moving Average (EWMA) Based Opportunistic Data Transmission (EWMA-ODT) and Artificial Colony Algorithm Based Query Response Transmission (ABC-QRT) approaches for efficiently handling the routing challenges of IBNNs. In EWMA-ODT, the moving Nano Biosensors (NBSs) employ the EWMA method attributes to aggregate detected data by assigning high weightage to the recent detected information. Later, the aggregated data is transmitted to the Nano Router (NR) when the direct data transmission opportunity is available, the reception of aggregated briefs NR about the condition of the network after the last successful interaction with minimum energy consumption. Whereas, the ABC-QRT approach introduces the ABC algorithm for the selection of those optimal NBSs that have maximum fitness value for satisfying the data transmission demand of the external healthcare system with minimal traffic overhead. The simulation results validate that the joint contribution of these approaches enhances IBNNs lifetime and reduces end-to-end delay as compared to the flooding scheme.

In this paper, a multiple-input-multiple-output (MIMO) antenna featuring circular polarization diversity, and designed on a common coplanar ground is presented. The proposed antenna design utilizes a coplanar waveguide (CPW) feeding technique with three parallel coplanar ground planes, and two feedlines in-between. For circular polarization (CP), quasi-loops are created by etching slots on the outermost ground planes. With this configuration, circular polarization diversity is induced in the MIMO antenna with the left-hand CP (LHCP) from one antenna and the right-hand CP (RHCP) from the other. The total footprint of the antenna radiator is only 0.78λ 0 × 0.55λ 0 = 0.42λ o 2 . Experimental results show perfectly overlapping impedance and axial ratio bandwidths of 39.3% (4.5 GHz to 6.7 GHz). In addition, average in-band isolation |S 21 | ≤ -15 dB without any added complexity or active circuit elements. The peak realized gain of the antenna is 5.8 dBic with broadside radiation pattern in the +zdirection and envelope correlation coefficient (ECC) of 0.005. The antenna is suitable for multiple applications in the C-band that includes WLAN (5 GHz, 5.2 GHz and 5.8 GHz) and WiMAX (5.5 GHz).

In this paper, spatial and polarization diversities are simultaneously implemented in an ultra-wideband (UWB) multiple-input-multiple-output (MIMO) antenna to reduce the correlation between the parallel-placed radiators. The keystone of the antenna is systematically modified coplanar ground planes that enable excitation of circular polarization (CP). To realize one sense of circular polarization as well as ultra-wideband operation, an extended rectangular slot is etched on the left-hand-side of the coplanar waveguide (CPW) feed. This is combined with the asymmetrical ground plane geometry on the right-hand-side of the feeding line. The current flowing on the slotted ground plane forms a quasi-loop and generates CP, whereas the combination of the vertical current on the feedline and the horizontal current on the asymmetric ground plane adds to the axial ratio (AR) bandwidth. To implement the MIMO design with polarization and spatial diversity, the position of the coplanar ground planes is switched with respect to the feedline, and placed in a parallel formation with the edge-to-edge distance of 0.29λ0 . All geometrical parameters are optimized at the full-wave level of description before prototyping and experimental characterization. Simulation and measured results indicate that the proposed MIMO antenna features approximately 82% impedance bandwidth from 2.9 GHz to 7.1 GHz and 68.5% (3.1 GHz- 6.35 GHz) AR bandwidth. Moreover, the peak envelop correlation coefficient (ECC) is below 0.003, which corresponds to almost no correlation between the radiators. The antenna can be operated with either bidirectional or unidirectional characteristics, covering multiple commercial application bands including WLAN and WiMax.

Published in: Conference: The 2019 IEEE International COnference on Electrical and Computing Technologies and Applications (ICECTA 2019)

In this paper, a novel design of dielectric resonator antenna (DRA) with a reconfigurable radiation pattern capability is presented. Reconfigurability in the azimuth plane is achieved by symmetrically placing six electromagnetic bandgap (EBG) sectors around the DRA. Each sector is composed of twenty-six circular shaped mushroom-like EBG unit cell. In order to achieve 360 degrees pattern reconfigurability with a minimum number of diodes, a network of metallic veins printed on a conductor-backed dielectric slab is used to group and connect the vias in each EBG sector. In addition, a switching PIN diode is integrated to the circuit to control the beam steering in the entire azimuth plane towards the respective desired sector by turning On and Off the diode. 60 GHz DRA prototype incorporating the EBG switching circuit is fabricated and tested. Results show 360 degrees pattern reconfigurability in the azimuth plane, with a realized gain of 4.2 dBi, and less than -16 dB impedance matching level over the desired bandwidth are achieved

Published in: Progress In Electromagnetics Research

In this work, a simple propagation channel model for microwave-based pinless subsea connectors in the 5 GHz band is presented. Both high electromagnetic attenuation in seawater due to absorption and the near-field working conditions typically present for underwater connectors are taken into consideration. Therefore, a simplified path loss model based on linear regression is identified. The study shows that high-speed pinless subsea connectors are a reality over several cm of seawater gap when appropriate microwave receiver technology is selected with sensitivities of about-100 dBm. Experimental results show that both half-duplex gigabits-per-second and full-duplex 100-Mbps technologies have a strong potential to be developed in the 5 GHz band.

A novel millimeter-wave hybrid isolator is presented to reduce the mutual-coupling (MC) between two closely-spaced dielectric resonator (DR) antennas at 60 GHz. The proposed hybrid isolator consists of a combination of a new uni-planar compact electromagnetic band-gap (EBG) structure and a Millimeter-wave (MMW) choke absorber. The design of the proposed EBG unit-cell is based on the stepped-impedance resonator (SIR) technique. Results show that the proposed EBG structure provides a wide frequency bandgap in the 60 GHz band with miniaturization factors of 0.79 and 0.66 compared to conventional uni-planar EBG and uni-planar compact (UC-EBG) structures, respectively. The proposed EBG is then placed between two Multiple Input Multiple Output (MIMO) DR antennas to reduce the MC level. As a result, an average of 7 dB level reduction is obtained. To further reduce the MC level, a thin MMW choke absorber wall is mounted vertically between the two DR antennas and above the EBG structure. An average of 22 dB MC reduction is achieved over the suggested bandwidth while maintaining good radiation characteristics. The measured isolation of the prototype antenna varies from –29 to –49 dB in the frequency range from 59.3 GHz to 64.8 GHz. In fact, the proposed hybrid isolator outperforms other hybrid isolation techniques reported in the literature.

Published in: International Journal on Communications Antenna and Propagation

This paper presents an experimental validation of the receiver sensitivity for 100- Mbps microwave data communications in a typical subsea environment. It is demonstrated that underwater microwave-based pinless connector solutions can perform under conditions that have not been explored until now. Traditional “pinned” subsea wet-mate connectors require precise rotational and angular alignment to achieve efficient and reliable connections. The demonstrated flexibility offered by pinless connection shows clear operational and reliability advantages. In this study, experimental works are based on a simple loop antenna fabricated on PCB FR4 substrate under typical subsea boundary conditions. Measurement results show that high data throughputs of 100 Mbps are achieved at 2.4 GHz with a receiver sensitivity of -60 dBm, using optimized regular antennas. In addition, maximum data throughputs are attained for seawater gaps of about 40 mm

Published in: International Journal of Mechanical Engineering and Technology

Design, fabrication and testing of millimeter-wave (MMW) dielectric resonator antenna (DRA) surrounded by electromagnetic band-gap (EBG) structure are presented. For this purpose, MMW mushroom-like, circular patch EBG (CP-EBG) cell is designed and fabricated. The propagation characteristics of the proposed CP-EBG structure are measured using the asymmetric microstrip line method. A cylindrical DRA incorporating the developed CP-EBG structure is then designed and its performance is evaluated with and without the CP-EBG around the 60 GHz bandwidth. Measurements show a significant improvement in the antenna radiation characteristics when it is surrounded by CP-EBG structure. A gain increase of up to 3.2 dBi is obtained while preserving the gain flatness over the suggested bandwidth ( ± 0.7 dB). An additional backlobe suppression of up to 6.5 dBi is achieved. Moreover, radiation toward substrate edges is significantly reduced.